“Young Women’s Leadership and Voices at the UN”: event at the UN Commission on the Status of Women

“Young Women’s Leadership and Voices at the UN”: event at the UN Commission on the Status of Women

The discussion about the state of girls’ leadership in the global political arena, was co-sponsored with the UN Department of Public Information/NGO Relations Outreach Division’s Advocacy and Special Events Section, in collaboration with the American Association of University Women (AAUW). 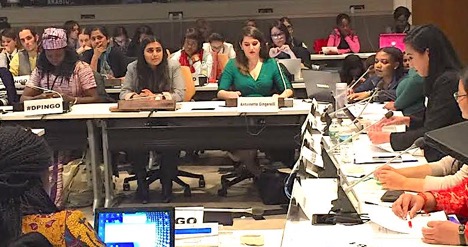 In welcoming remarks, Antoinette Gingerelli, NGO representative of AAUW, said, “Empowerment of women and girls is not only a necessity but has a multiplier effect across all developmental areas. When the issues of young women and girls are not addressed and ignored in policy and conversations, a lot of times it's because their voices are not at the table. If we really want to create inclusive policy that is directly informed by the experiences of young women, girls and other marginalized communities, their voices need to be at the table.”

AAUW is an NGO whose mission is advancing the equity of women and girls through advocacy, philanthropy, education, and research.

Moderator Rena Zhu, NGO Youth Representative to the United Nations Department of Public Information, stressed the importance of young women’s voices in the global women’s rights conversation. She urged the audience to broaden the conversation on feminist advocacy and engage in intergenerational dialogues.

Aasha Shaik, Rutgers University student and Girl Advocate with The Working Group on Girls (WGG), a coalition of over 75 international and national NGOs that collectively empower and protect the rights of girls sponsored by AAUW, opened the program by singing her original composition entitled “Day of the Girl (Tick Tock)” (https://www.theodysseyonline.com/open-letter-to-the-organization-that-showed-me-my-wings). The song was originally performed by Shaik and other girl leaders at the 2014 UN International Day of the Girl conference.

Not only my sisters but my brothers suffer
Cause the gender divide don't discriminate
Yeah, it's been decades since we gained the U.S. vote
Yet still no true equality.

Formal statements began with an address from Margot Baruch, Director of Global Engagement at Douglass Residential College at Rutgers University. Baruch cited inspiring intergenerational dialogues with older feminists as the impetus for the programs she now spearheads at Douglass Residential College. These multidisciplinary programs provide students with grounding in feminist theory and the critical awareness of privilege, access and space. They also empower students to attend global conferences, explore feminist advocacy proxies, develop critical analyses of the state of feminist advocacy, and lead with “creativity, conviction and critical insight.”

Next, Aasha Shaik focused on the importance of bringing girls to the table and listening to their voices without condescension. She underlined that girls’ rights should be treated as an entity that is distinct from women’s and children’s rights. When it comes to children’s rights, resources are disproportionately directed towards boys. Meanwhile, girls have unique concerns like about education and childcare that may be different from those of older age females. Additionally, girls face two-fold marginalization due to their gender and age not to mention other factors like race and religion. Shaik stressed the need for girls’ own platforms to address their unique issues and girl leadership at higher levels.

“We don’t need older women speaking out on girls’ issues,” Shaik said. “Girls are the experts on the issues of girls and they can best speak about how these issues marginalize them and how policies can be constructed to help them.”

Alina Saba, Program Coordinator at the National Indigenous Women Forum, asked where the space is for young women in the overarching women’s movement. She called for intergenerational leadership, solidarity, and the questioning of ingrained structural bias. She stressed the importance of the UN in creating democratic spaces where young women can learn, be heard, and collaborate.

Panelist Noluthando Nzimande is a member of the UN Inter-Agency Network on Youth Developments’ Working Group on Youth and Gender Equality. She began working for an NGO as an adolescent in rural Africa when she was invited to join a community meeting for girls aged 13-18 that promoted education, leadership training, and empowerment. This NGO’s programs were highly beneficial to the girls of the community, and Nzimande eventually took on leadership roles. At age 16, she was sent to Japan for a UN conference on biodiversity.

“I knew the purpose of going there was to represent the girls left in the rural area who are suffering from lack of water and climate change, and who are losing their land,” she reflected. “They can’t fetch wood because the forest is not there anymore.”

This experience inspired her to show other rural girls that international citizenship is possible and that they too can have a voice in the global community.

She concluded by urging the UN to open up more space for marginalized groups and for advocates to expand their impact beyond just putting it in a paper no one might read.

Finally, panelist Aishu Narasimhadevara, an NGO Youth Representative for The United Nations Department of Public Information, spoke about her experiences as a youth leader at the UN as part of the DPI/NGO Youth Steering Committee. She was on the draft committee for the Gyeongju Youth Declaration that was presented to civil society and UN officials at the conclusion of the 66th UN DPI/NGO Conference held in Gyeongju, South Korea, the previous year. This document addresses and reinforces the importance of youth voices in the global decision making process. She concluded by saying that future Youth Steering Committee endeavors will be organized to bring global youth together for dialogue and collaboration.

NOTE: In showing this report of mine to a woman of an older generation, she remarked, “Let’s not forget that all females need to be united and that women of all ages have similar issues. While it’s certainly important to hear young women’s voices, let’s be sure not to emphasize age differences that might encourage ageism and division.”

NOTE: Flyer for the event is below

Reported by Marlo Kronberg, currently a second year Masters student in Clinical Psychology at Teachers College Columbia University and a student in Dr. Judy Kuriansky’s class on “Psychology and the United Nations.” 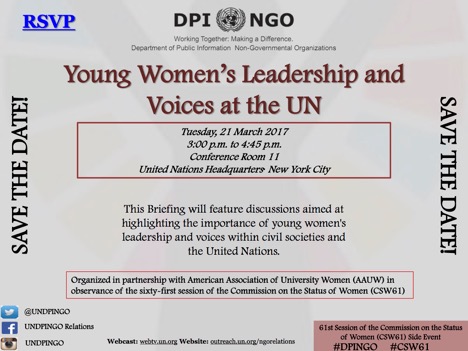