Nelson Mandela International Day is celebrated annually at The United Nations on 18 July, Nelson Mandela’s birthday, to commemorate the legacy of the anti-apartheid hero who went on to become President of South Africa.

This year, the UN headquarters in New York held a plenary on 24 July from 10am-12pm in the Trusteeship Council Chamber to celebrate Mr. Mandela’s life and accomplishments, and to award the inaugural UN Nelson Rolihlahla Mandela Prize (NRMP). The honorees were Dr. Helena Ndume of Namibia and Mr. Jorge Fernando Branco Sampaio of Portugal.

The President of the UN General Assembly, Mr. Sam Kutesa of Uganda – who had previously served as Uganda’s Minister of Foreign Affairs – opened proceedings by describing the impressive achievements of Mr. Mandela, emphasizing the interconnection between his principles and those of the UN and the awardees. Introducing Dr. Ndume and Mr. Sampaio, he highlighted their having "dedicated their lives to the service of humanity, particularly in the promotion of reconciliation, social cohesion, and community development," qualities embodied by both Mandela and the UN. 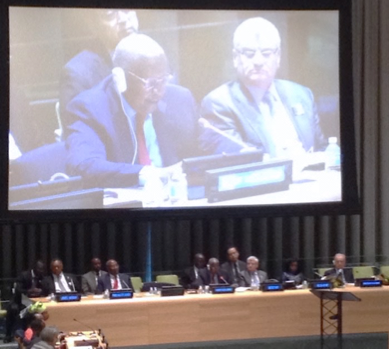 Dr. Helena Ndume is an ophthalmologist who has treated over 30,000 patients afflicted with blindness or eye-related illnesses throughout her native country of Namibia and other parts of the world. One of only six ophthalmologists in Namibia, she has been affiliated with local hospitals as well as the Namibia Red Cross Society and Surgical Eye Expeditions (SEE) International.

In her acceptance speech Dr. Ndume spoke of her past, revealing that at 15 years old, she “fled the country to escape the violence, imprisonment,.....abandonment and torture.” Escaping to Zambia, Ndume continued her education and finished secondary school. She went on to study medicine at the University of Leipzig in Germany.

“The good news is that blindness could be treated, if not prevented,” she said. In concluding remarks, she urged UN member states to work towards eradicating preventable blindness by the year 2030 – the year set for the conclusion of the Sustainable Development Goals.

The second honoree, Mr. Jorge Sampaio, served as President of Portugal from 1996-2006. He spoke about his country and its people, as well as his core principles, which include tolerance, cooperation, and resilience. Prior to his presidency, Mr. Sampaio served as a leader in Portugal’s struggle to restore democracy, as Deputy Minister for External Cooperation, and as Mayor of Lisbon from 1989-1995. The emergency scholarship program he launched, called the Global Platform 4 Syrian Students (GP4SS), distributes scholarships to Syrian students to continue their university studies. The program received support from the Council of Europe, the League of Arab States, and the Institute of International Education.

“This award is only mine in trust,” said Sampaio, acknowledging the Prize nominators and colleagues who have helped the GP4SS initiative. He shared a famous quote from Mr. Mandela, “Our greatest glory is not in never falling, but in rising every time we fall,” as inspiration for the audience to remain resilient in the face of current tragedies and wars. Stating that he “should like to dedicate this acclaim to my country, as well as to my fellow citizens,” Sampaio paid tribute to Portugal for being an exemplary society of “brave, generous, outgoing, resilient people” who are also “tolerant, open-minded, and cooperative.” 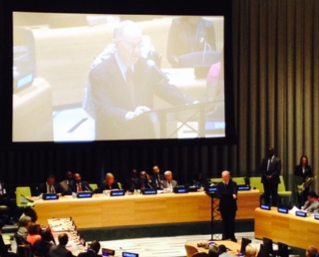 In closing, he reminded the audience to be tolerant and kind, consistent with another quote from Mandela: “No one is born hating another person because of the color of his skin, or his background, or his religion. People must learn to hate, and if they can learn to hate, they can be taught to love, for love comes more naturally to the human heart than its opposite.” He further reminded the audience of the “compassion, hope, resilience, drive, and sacrifice” needed to continue building hope and peace for the future.

Speaking on behalf of UN Secretary-General Ban Ki-moon, Chef de Cabinet Susana Malcorra lauded Mandela for giving hope to people in South Africa, citing his address to the UN for the first time at the 1990 UN Against Apartheid Assembly.

The current Prime Minister of Uganda, Dr. Ruhakana Rugunda, commended Mandela’s knowledge and courage which led to the end of apartheid in South Africa, a country that was “once so divided”. Dr. Rugunda reminded the audience that “the time is always right to do the right thing.”

Reverend Jesse Jackson Sr., founder and president of the Rainbow PUSH Coalition and Baptist minister in the USA, addressed several issues. In calling for cooperation through global alliances, especially in the face of the crisis caused by the Ebola epidemic, he emphasized that the affected West African countries need ongoing aid “now and now and now.” He also called for the UN to equally represent countries by seat, given that Europe and North America make up 14% of the world yet have nearly 50 seats at the G20 table, while Africa makes up 16% of the world but has only one seat. Jackson encouraged the audience to consider “hope and healing over hate and hurt, redemption over retaliation, at the crossroads, choose getting ahead, not just getting even.” 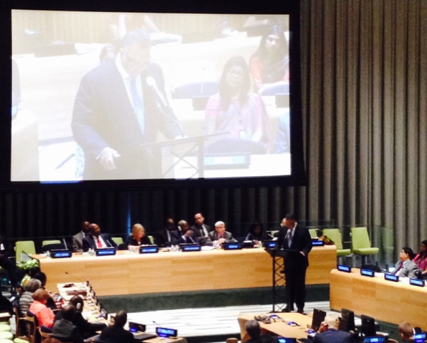 Mission representatives also had high compliments for the two awardees. Speaking on behalf of Latin America and the Caribbean States, the representative of Paraguay called Mr. Sampaio “a fighter for democracy.” The distinguished representative of Spain, meanwhile, commended Mr. Sampaio on his work in providing scholarships to the Syrian students and Dr. Ndume for enabling 30,000 Namibians to see.

The distinguished representative from the United States commended Mandela for having “dismantled the shield of apartheid,” and the distinguished representative from South Africa urged the audience to “continue drawing lessons from his life,” emphasizing “sacrifice, collective leadership, hard work, and mutual respect” and “to simply do good every day.”

The attendees at the event expressed great appreciation, sentiment and inspiration from the day’s presentations.

Note: The President of the International Union of Psychological Science (IUPsyS), Dr. Saths Cooper, a well-known figure to IAAP, was an anti-apartheid activist, who was imprisoned in the same cell bock as Nelson Mandela. A video and articles about Cooper and Mandiba (Mandela) have been produced and written by IAAP UN Representative Dr. Judy Kuriansky. Click here to read Dr. Judy's Fox News Latino profile of Dr. Cooper, and here for her Huffington Post World Post feature on the pair's friendship.