After the Adoption of the Post-2015 Transformative Agenda: Report on Post-Adoption Meetings with Permanent Missions of Ireland, Germany, the Netherlands, and Brazil to the United Nations

Following the adoption of the post-2015 transformative agenda at the intergovernmental negotiations (IGN) at the United Nations (UN), the means of implementation (MoIs) will now be the primary focus of governments, as they strive to fulfill the 17 goals and 169 targets of the Sustainable Development Goals (SDGs) by 2030 – the year concluding the SDGs. On Tuesday, 4 August 2015 -- two days immediately following the historical adoption of the SDG document on Sunday 2 August - meetings were held with several missions of the UN by the IAAP UN team and colleagues from Portugal. These meetings also represent the theme of the SDG 17 to establish multi-stakeholder partnerships, and the commitment many governments made to partnerships with civil society, acknowledging that civil society will play a major role in the achievement of the goals and targets through their projects and work on the ground.

The IAAP team consisted of Dr. Judy Kuriansky, Main IAAP representative to the UN and Chair of the Psychology Coalition of NGOs to the UN (PCUN), and colleagues Dr. Telmo Baptista, President of the European Federation of Psychologists’ Association (EFPA) and Dr. Samuel Antunes, Vice President of the Portuguese Order of Psychologists, as well as two youth representatives on the IAAP UN team, Joel Zinsou and Monica Kim.  Meetings were held with representatives at the Missions of Ireland, Germany, the Netherlands, and Brazil to the United Nations.

Packets were prepared and handed out at these meetings, with flyers and information to show the diverse activities of IAAP and PCUN at the UN, regarding issues related to a vast range of the UN global agenda, including against violence against women, projects addressing poverty, HIV/AIDS education and employment, maternal and child health, trafficking, refugees, and many others.  Books on the topics of psychological contributions to disaster relief, and peace in the Middle East were also included.  Similar packets had been given to hundreds of delegates during the advocacy campaign; eliciting one remark, “this is the most impressive packet of information ever presented by an NGO.”  The packet also included information on EFPA as well as the Portuguese Order of Psychologists.

The discussion centered around potential multi-stakeholder partnerships of MoIs for the SDGs, particularly for Goals 3, 4, 8, and 9. These goals pertain to health (Target 3.4 explicitly addresses mental health and wellbeing), education, employment, and infrastructure, respectively. The meetings served as a platform to move the agenda forward by establishing multi-stakeholder partnerships between the Permanent Missions and IAAP (also on behalf of the PCUN) as well as for EFPA, given the latter’s 300,000+ members. The missions were selected as they are European countries, and also a Portuguese-speaking country. Additionally, some projects already operating on the ground by member NGOs in these countries could serve as examples of MSPs. For example, Brazil had demonstrated this support by holding many morning briefings with civil society during the IGN process.

At the Permanent Mission of Ireland to the United Nations, the EFPA and IAAP delegates met with Deputy Permanent Representative Tim Mawe and Adviser Christina McElwaine to discuss the possibility of a multi-stakeholder partnership between EFPA and Irish constituencies. In the meeting, Dr. Baptista brought attention to the various EFPA programs in place, covering education, mental health, work, and disaster relief, to name a few. He provided a finding that “the cost of depression in Europe every year is 617 billion Euros.” The 617 billion Euros, he said, are accrued from both “direct and indirect costs.”

Ambassador Mawe stated that the agenda “is effectively a 15-year process,” with the first 1-2 years consisting of transitional and organizational coordination and the next 3-7 years consisting of adopting similar means of implementation. Ms. McElwaine brought up the importance of national implementation, adding that “if at the national level things are going well, then experiences can be shared at the regional level, and pure learning happens… national implementation would be key to the success of this agenda.” She also urged communication of the agenda, coming from outside of the government, to which Dr. Judy Kuriansky contributed her valuable ability as a journalist to more easily communicate the post-2015 agenda to the general public. The meeting signified a possibility for a working collaboration between EFPA team members and the Irish mission in the future.

Dr. Judy described an NGO on the ground in Ireland that can serve as an example of a scaled up MSP. Foróige, the National Youth Development Organisation, is the largest youth development organization in Ireland, with many leadership programs; run by CEO Sean Campbell and Pat Dolan, PhD, Professor, UNESCO Chair, and Director of the Child and Family Research Center at National University of Ireland in Galway.
See: Global Network of UNESCO Chairs on Children, Youth, and Communities

Partner Mark A. Brennan, Professor and UNESCO Chair in Community, Leadership, and Youth Development at The Pennsylvania State University in the USA has just completed a research project. 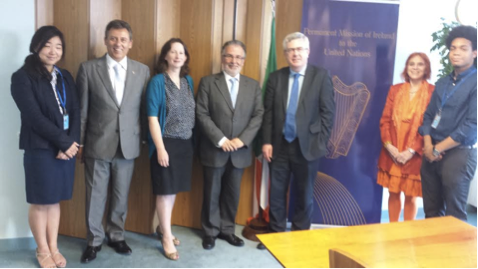 At the meeting at the Mission of the Federal Republic of Germany to the United Nations, First Secretary Till Spannagel confirmed interest in partnerships with civil society, business, and academia in the next 15 years, saying “health issues are very important to Germany.” Sharing Dr. Baptista’s view on the importance of accurate data census, Mr. Spannagel suggested that Portugal and Germany develop a mutual platform for shared data, which would ultimately aid in providing more accurate information. Mr. Spannagel also agreed with EFPA President Dr. Baptista about the importance of implementing “pro-social” developmental programs in schools, so as to invest early in prevention and promotion relating to health issues rather than allocate funds as reactionary measures.

Very much in line with the missions of the EFPA and IAAP teams, Mr. Spannagel voiced openness to facilitate future multi-stakeholder partnerships and resulting projects between the civil society teams and German constituencies, noting, “they are worth working on.”

At the Permanent Mission of the Kingdom of the Netherlands, First Secretary Anne Poorta noted having worked on the post-2015 agenda for three years before its adoption on 2 August, and shared his satisfaction with the outcome. Regarding the subsequent process of determining MoIs and indicators, he said, “From our perspective, we have always advocated the indicator process to be a technical process. We need people, like you [the team] in fact, who know what they are speaking about, and who have access to various statisticians and the other actors who are primarily involved in the process.” In response to statistical expertise offered by Dr. Baptista, Mr. Poorta voiced openness to facilitating a connection between Dr. Baptista as the President of EFPA and the Kingdom of the Netherlands’ Statistics Office, as it is a member of the European Statistical Commission, for such purposes. (Note: 30 governments are members of the Statistical Commission, mandated to come up with indicators for the SDGS by March of 2016).

As in the meeting with the Mission of Ireland, Dr. Judy had come to the meeting with the Netherlands prepared to discuss multi-stakeholder projects with examples of what member NGOs are doing on the ground.  At the EFPA meeting in Milan just recently in July 2015, Dr Judy had been approached by Piet Jansen, founder of a youth treatment center -- and sent a follow-up email – about “looking for representing agents and ambassadors willing to support our cause. I would really appreciate it if you could help us getting in touch with stakeholders you deem interesting for us to contact.” “Yes We Can” a specialised treatment centre for adolescents age 13-21, successfully treating behavioural disorders (ADHD, ADD, ODD), addictions (drug, game, sex, gambling) and related behavioural problems (authority issues, motivational problems, fear of failure, low self-esteem, mood disorders, eating disorders, disturbed family relations, communication problems). She gave Mr. Poorta the flyer information about the program, which he reviewed and was pleased to receive.

“It’s something we have advocated, in fact, throughout this process…” said Mr. Poorta, “the idea of different partners coming together to implement the goals and targets; the idea that from different sectors, you are going to gather people, and each brings their own expertise and their capabilities. That is crucial.” The meeting between the representatives of EFPA and IAAP with the Permanent Mission of the Kingdom of the Netherlands to the UN offered great promise for successful formation of partnership that reinforced the Netherlands’ role within the groups.

A relationship between the Netherlands and PCUN had already been forged when the Kingdom of the Netherlands co-sponsored the PCUN event about Ebola on 17 December 2014, on “Eradicating Stigma & Promoting Psychosocial Wellbeing, Mental Health and Resilience in the Ebola Epidemic:  Policies and Practices to Protect the Global Community,” and the Ambassador and Permanent Representative, Karel van Oosterom, attended and made opening remarks, presenting the role of his country in contributing resources to the Ebola-affected countries during the epidemic. 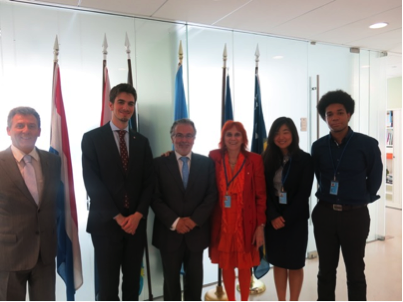 The EFPA and IAAP teams also had a meeting with the mission of Brazil to the UN.  This built on two previous meetings that had been held, in conjunction with visits of the Portuguese colleagues to New York; namely, in March 2014 during the Open Working Group meetings drafting the SDGs, and then in August in conjunction with the Department of Public Information NGO conference at the UN. As mentioned above, Brazil had demonstrated commitment to working with civil society by its many briefings with NGOs during the IGN.  This time, the team met with Second Secretaries Adriana Telles Ribeiro (who was present in the previous meetings) and Vicente Amaral Bezerra to discuss possibilities of multi-stakeholder partnerships with Brazil. Ms. Telles Ribeiro invited Mr. Bezarra to the meeting as he was very involved in drafting Brazil’s positions for the SDGs, about which he gave the team a briefing.  He voiced appreciation for the opportunity to hear different perspectives, of government and civil society, and explained that the second-to-last meeting of the interagency expert group on indicators would take place in October, after which there would be more knowledge regarding the process of addressing indicators.

Ms. Telles Ribeiro explained that Brazil is currently focused on eradicating hunger and reduction of violence against women. She offered to review a working proposal composed by Dr. Baptista so as to keep in mind future opportunities to develop multi-stakeholder partnerships. 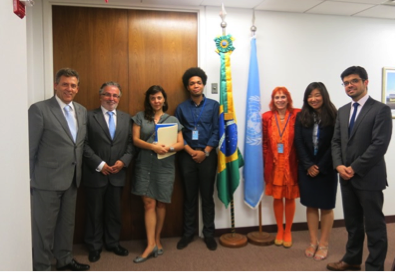 Given the consensus adoption of the Post 2015 agenda by the governments on the past Sunday, the four meetings took place at a time when governments are looking optimistically towards the affirmation of the document at the UN Summit (of heads of state) this coming 25-27 September. Given the importance of the means of implementation as critical to accomplish the SDGs, the EFPA and IAAP delegates built valuable connections, laid groundwork, and solidified relationships between several UN mission with the international, European and Lusophone networks to work towards establishing important multi-stakeholder partnerships in the future to achieve progress in the global agenda.