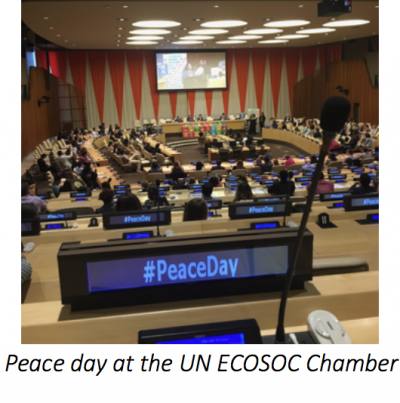 The importance of youth participation and voices at the United Nations is currently a major theme. The Third Annual Peace Day Youth Summit was held at United Nations headquarters in New York City on 15 September 2017, a few days earlier than the official Peace Day on 21 September. Over 500 engaged young people and global leaders came together to discuss the Sustainable Development Goals (SDGs) and to share about actions the government, businesses, and young people are taking towards achieving the SDGs.

An important goal of the Peace Day Youth Summit was to bring awareness to the global celebration of Peace Day with its overall message of international peace, bringing people together and reminding them of their common humanity. United Nations Secretary-General António Gutteres named the theme this year as: “Together For Peace: Respect, Safety, and Dignity For All,” with the intention to draw attention to the refugee crisis.

The first panel, entitled, “Literacy, Peace, and Global Citizenship,” falls under SDG15, namely, “Peace, Justice, and Strong Institutions.” The Deputy Permanent Representative of the Mission of the Republic of Korea to the United Nations, H.E. Ambassador HAHN Choong-hee,welcomed the panel, giving Korea’s support to the United Nations goal to combine peace, global citizenship and youth, and focusing his message on the importance of Global Citizenship for all.

Mr. Bruce Knotts, Chair of the DPI/NGO Executive Committee, spoke about global citizenship and how to achieve this. He shared a personal story of unlearning intolerance based on same-sex interracial marriage. He also discussed the importance of teaching self-respect and respect of others, beginning at a very young age.

The summit paused after the first panel for a “social media moment.” A representative from AIESEC, a non-profit youth-run organization, asked the audience take out their phones to take a photo, and hashtag the photo #Peace Day,, to help spread awareness of peace day and the SDGs.

The next panel focused on “Inspiration and Peace Building on the path to the SDGs”. The panel opened with 10-year old Sierra Preveza, a kidney cancer survivor, and her 12 year-old sister Emalena Preveza, who founded a non-profit, Childhood Cancer for Kids. The sisters talked about how their initiative has three main areas of focus: (1) childhood cancer fundraising, (2) childhood cancer yoga, and (3) childhood cancer awareness month.

The next speakers were Louis Venturelli and Telma Viale from World Summit of Nobel Peace Laureates, an organization that brings people together to address global issues with a view to encourage and support peace and human well-being in the world. They hold summits around the world to share the overall message of peace building, supporting their threefold mission: (1) to create a peace platform; (2) have peace education; and (3) advance the causes of the Nobel Peace Laureates. Viale asked the audience, “What are you doing in your life to build a peaceful society today?”

Representatives Terry Sears and Sallie Lynch from Tuesday’s Children, a long-term service model for disaster recovery and healing through community, described their activities started after 9’11 to support youth, families, and communities impacted by terrorism and traumatic loss. They explained their long-term healing model that has helped over 15,000 people impacted by the 9/11 tragedy. The long-term healing model is a train-the-trainer curriculum for sharing their lessons learned, as well as an online toolkit that creates community-based long-term healing, and a consulting-based guidance for replication and adaptation.

Jeremy C. Kohomban, the president and CEO of The Children’s Village, discussed their partnership with families to help society’s most vulnerable children so that they become educationally proficient, economically productive, and socially responsible members of their communities. He spread the message of giving love in order to help someone through a challenging time.

In another presentation, Abdourrachid Sow, a student from Endicott College, discussed how one program changed the course of his life by sponsoring him to get an education when he was fleeing to Mali to escape war in the Ivory Coast after his family lost everything. His powerful message was, “Think about how everyone can impact one life, only one life, so that person can impact another life and then so on and so forth; this will make magic happen and help us live in a truly peaceful world.”

The panel discussion paused for an interactive moment with Andrew Tisba and Manuel Frederick from Let’s all Connect, a worldwide movement of human connectivity. The audience took part in an activity by putting together their hands palm-to-palm with the people next to them. They hope their messages helps people connect with cultural differences and create awareness for Peace & Unity. 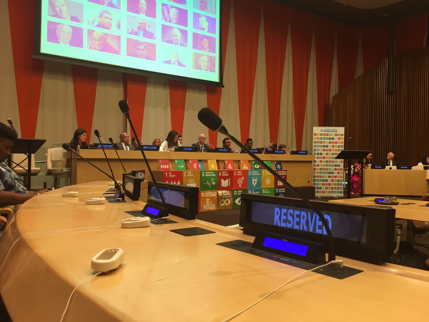 The third panel addressed “Sustainable Fashion and Creative Innovation.”The panel began with the speaker Mr. Michael Londrigan, who is Vice President for Academic Affairs at LIM College. He spoke about the importance of fashion and sustainability and encouraged everyone to buy organic and renewable resources when purchasing fashion items. He believes that fashion is key in sustainability.

Ms. Rachel Yue, from the Rachel Yue Life Show and representative for the New Silk Road, discussed how her brand works to create a sustainability fashion economy. Her talk show is a platform to communicate sustainable values to the public. Her team of fashion designers are working together to incorporate the SDGs to the New Silk Roadfashion company.

Mr. Tyler Clark from QoLab, which is a community movement for individuals and organizations to maximize creativity and inspiration for the free flow of ideas across industries, discussed how gaming could be used for many other purposes besides combatting violence, to support the SDGs. For example, Quo Lab is launching a new virtual reality game that incorporates all of the SDGs as well as promotes positive social change.

A sustainable fashion innovator and designer who was a contestant in the reality TV series Project Runway, Ms. Nathalia Castrillon, discussed the trillion-dollar industry of fashion and her belief that “Fashion is one of the most vital industries relating to sustainability and it is related to all of the United Nations SDGs.”

The last panel was on “Media’s Role in Advancing the Sustainable Development Goals.” Mr. Ken Ebie, representing the NYC Mayor’s Office of Media and Entertainment, discussed the importance of sustainability in film and television production. The newly launched company, NYC Filmgreen, focuses on film production in NYC reducing their environmental impact, as well as highlighting productions that have already reduced their environmental impact.

Panelist Ms. Kristin Gutekunst is Executive Producer of the SDG Action Campaign, which is a universal entry point for citizens to interact with the SDGs and support efforts to implement them. She asked the audience for their help in spreading awareness of the day September 25th, which was the day when 193 governments came together to make a promise to make the world a better place through the implementation of the SDGs (i.e., when the agenda was passed during the General Assembly).

Nygia Hendricks from the Wall Street Journal gave an inspiring speech about the importance of global citizenship education and the importance of sharing the #peaceday and #leaders message, through those hashtags on social media.

Mr. Amir Dossal, CEO of the Global Partnerships Forum, an international platform to address economic and social challenges through innovative partnerships, described the importance of engaging young people in the United Nations SDGs. He also talked about how if you want to make a difference, you have to take real action, and the significance of contributing to positive media outreach. He emphasized that media can do a lot for the SDGs by helping the public gain awareness.

The next speaker was Mr. Ari Eisenstat, who is the Co-executive Director at the UN Global Sustainability Index Institute, an independent UN-endorsed foundation working on education, sustainability, and activation for the SDGs. He spoke about his previous experience as an entrepreneur and his different philanthropic initiatives, such as virtual reality live stream.

The last speaker of the event was Ms. Clair Sommer, the Co-Executive Director at UN Global Sustainability Index Institute and representative from AIM2Flourish. She discussed how AIM2Flourish is a platform that empowers business students globally to share and discover positive profitable business stories that are achieving the SDGs. She encouraged the audience to share AIM2Flourish with their business schools.

The event concluded with a powerful performance from Baja Musical Group singing the popular song by The Beatles, “All You Need is Love.”

In my view, the Peace Day Youth Summit was a very inspirational event with speakers from diverse disciplines who had powerful messages and were doing meaningful concrete work that encouraged many young people who attended to take action, to help raise awareness and achieve the United Nations SDGs by 2030. 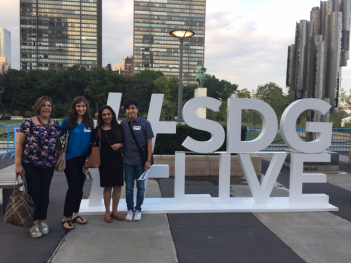 Reported by: Emma Wookey, graduate student at Columbia University Teachers College, student member of the International Association of Applied Psychology, and member of the class on “Psychology and the United Nations” by Professor Judy Kuriansky