Throughout the various sessions held at The United Nations over the past two years during the adoption process for the Post-2015 Transformative Agenda, references have consistently been made to the key role that youth play, both in defining the agenda and in identifying effective means of implementation.

From 5-7 August 2015, the 14th Youth Assembly at The United Nations (YA@UN) was held, bringing together hundreds of youth delegates from all over the world. This event, as shown in Figure 1 below, occurred at an important time, given the 70thanniversary of The United Nations as well as the adoption of the Post-2015 Transformative Agenda. The three-day conference was organized by Friendship Ambassadors Foundation, Inc. (www.FAF.org).

Figure 1: Delegates at the Summer 2015 Youth Assembly at The United Nations

The YA@UN Project Director Patrick Sciarratta opened the conference, noting that the youth delegates represent 42 countries but ultimately one youth culture. Mr. Sciarratta also pointed out that several current high-level UN officials were youth delegates in the past – including UN Deputy Secretary-General, Jan Eliasson, and the UN Secretary-General's Envoy on Youth, Ahmad Alhendawi – thus inviting this group to aspire to similar heights.

In Thursday's opening keynote speech, Youth Ambassador of the Ecuadorian Civic Committee of New York, Michelle Leon (seen in Figure 2 below), described her work with the foundation Eyesight for Everyone, which resulted from opportunities afforded her by being crowned Miss Ecuador New York Teen for two years in a row (2013-2014 and 2014-2015). Her contributions to awareness and fundraising have led to donations of 500 wheelchairs for adults, as well as computers, uniforms and school supplies for less fortunate youth to help further their education. 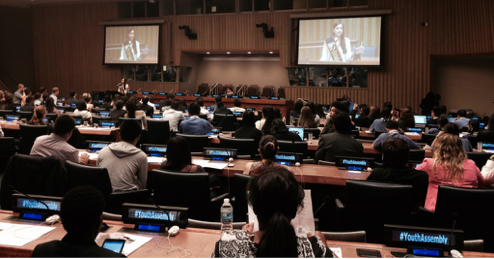 Over the three days, a total of 23 panel discussions and workshops took place. These were focused on important youth-related issues such as youth and social entrepreneurship, climate change, personal empowerment, and global development. Events hosted, meanwhile, included 'Youth Involvement with The UN', 'Youth and Financial Responsibility', and 'Cross-Sector Partnerships: Together We Can Change The World'.

In one afternoon session, Tami Kesselman, founder and Chief Solutions Officer at SolveforGood (pictured in Figure 3 below), emphasized the need to apply “systems thinking” in developing a project. This holistic approach takes into account how all the parts of the project interrelate and affect one another. One step in the process, called tracking key performance indicators (KPIs), helps identify any negative impacts the project may have on a particular sector of the community.

Ms. Kesselman cited the example of California-based footwear company TOMS Shoes as offering a harsh lesson in this regard. Initially, as part of the organization’s 'One for One' philanthropic business model, for every pair of shoes sold an additional pair was donated to a child in need. Over time, however, the initiative resulted in local people going out of business. 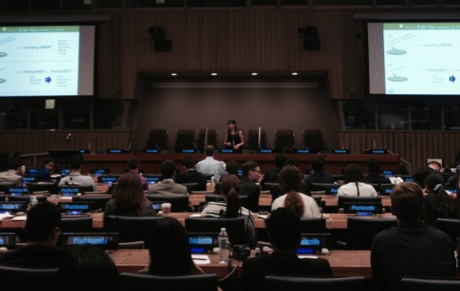 Another important element of the systems thinking approach is “owning your impact”, which involves conducting a cost-benefit analysis (CBA) by estimating (1) the total cost of the initiative (on all dimensions), and (2) the long-term tradeoff of the positive versus negative outcomes. In stark contrast to TOMS' unsuccessful One for One project, the grassroots Liter of Lightmovement successfully provides necessary energy to communities in need while continuing to maintain sustainable community practices (click here to watch Ms. Kesselman's presentation in full).

Throughout the three days, the UN Millennium Campaign hosted the 'My World Virtual Realty Series', offering delegates the chance to sample virtual reality using Oculus headsets. The two VR films shown were 'Waves of Grace', telling the story of a young female Ebola survivor in Liberia, and 'Clouds over Sidra', documenting the plight of the world’s most vulnerable people. Long lines (as shown in Figure 4 below) attested to the popularity of the experience. 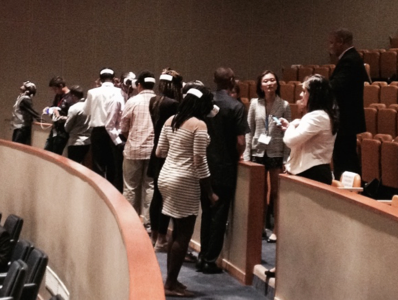 The conference drew to a close with a screening of the documentary 'Pad Yatra: A Green Odyssey'. The film recounts the treacherous journey embarked upon by 700 people through a devastated glacial region of the Himalayas known as 'the Third Pole'. Along the way the adventurers risked illness while collecting nearly half a ton of garbage, their aim being to raise awareness of the detrimental effects caused by climate change. In a Q&A session following the screening, writer and director Wendy Lee spoke about her personal transformation to higher sensitivity and compassion towards the environment. She urged the audience to place a similar value on environmental conservation, while gaining an understanding of the impact degradation can have on their own lives.

The YA@UN represented a valuable opportunity for youth to learn about important projects undertaken by their peers and adults that have the potential to inspire them to seize the initiative and become valuable players in the process of implementing the post-2015 transformative agenda.

Webcasts from all three days of the conference are now available via UN Web TV.