What does it mean to be a man? Achieving gender equality for all through respect, education and cooperation

What Does It Mean to Be a Man? Achieving Gender Equality for All Through Respect, Education and Cooperation

In commemoration of the 27th anniversary of the Convention on the Rights of the Child, the NGO Committee on Children’s Rights held a round-table discussion, “What does it mean to be a man? Achieving gender equality for all through respect, education and cooperation,” on Thursday 17 November 2016. Guest speakers Mr. Ravi Karkara, Senior Advisor Strategic Partnership and Advocacy to the Assistant Secretary-General, Deputy Executive Director UN Women, and Mr. Quentin Walcott, Co-Executive Director of Connect New York, collectively argued for the need to consider the role of the dominant socially constructed definition of manhood and masculinity in achieving gender equality.

Mr. Ravi Karkara shared the origins of his passion for considering the role of men in achieving gender equality. Karkara and his twin sister were raised by a mother and father with strong feminist beliefs. In contrast to the sociocultural milieu, his mother chose not to marry at a young age and instead attended graduate school. Karkara’s father was in turn constantly supportive of his mother and fostered a family environment of equality and respect. As a testament to his upbringing, Karkara recalled a time when he had dinner at a friend’s house and noticed that his friend’s mother and sister were not eating with the men. When Karkara inquired why this was the case, he was told that it was simply tradition for the women to wait and eat after the men. “The tradition has to change,” Karkara boldly retorted.

In a second anecdote, Karkara recalled that while working on women’s political participation in villages across India, a woman at the Rajasthan airport pulled him aside and pointed out a group of men gambling and drinking. She told him that it was the men, not the women, who needed to learn about gender equality. Later, while working on a program on reproductive health and rights for adolescent girls, he experienced a similar pushback. While the adolescent girls appreciated the value of what Karkara was telling them, they asked, “Shouldn’t you talk with adolescent boys about respecting and understanding girls’ bodies and rights?” Together, these experiences, among others, made Karkara keenly aware that gender equality initiatives focused on girls and women in absence of boys and men cannot succeed.

Three broad recommendations Karkara made for achieving gender equality based on his lessons learned are:

Throughout the life course, boys and men are continuously exposed to representations of “real” men as dominant, aggressive, and strong leaders. This dominant hyper-masculine caricature of manhood neatly aligns with a society in which men are socialized to become “providers and protectors,” but undervalues their role as caretakers and nurturers. Early programs must therefore be implemented to teach both boys and girls that they are equals from infancy. Without programs designed to reduce the impact of gender-based prejudice and stereotypes early on, they will ultimately lead to discriminatory behavior during adolescence. Additionally, boys and men must continue to have conversations with their fathers and other male role models throughout the lifecycle to maintain a dialogue on gender equality. Importantly, parallel conversations must occur for girls and women. It is not enough to focus on one gender group or one developmental period/age group to address gender equality.

Karkara described UN Women’s LEAP model for achieving gender equality by 2030 as consistent with his approach:

L: Leadership of young women in all spheres strengthened

A: Action on ending violence against women and girls 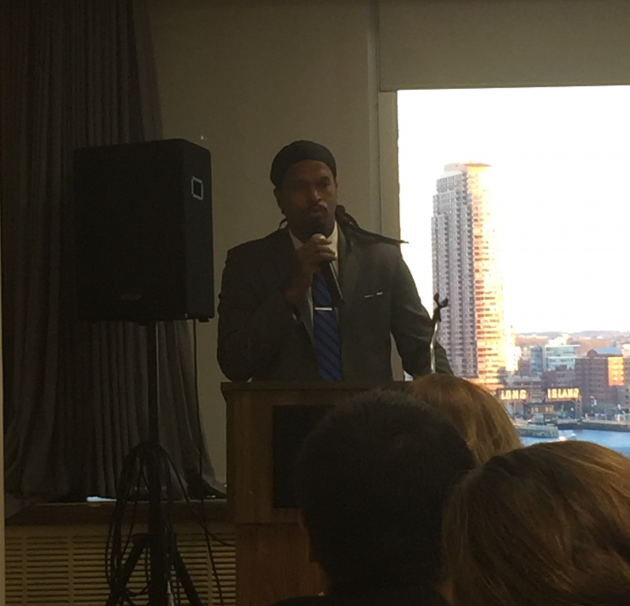 In the next presentation, Mr. Quentin Walcott spoke about his focus on men and boys as a means for achieving gender equality. Traditionally, child welfare services are optimally designed to intervene following incidents of domestic violence, and society typically frames domestic violence as a “woman’s issue, something for women to deal with.” In contrast, Walcott is more interested in preventing domestic violence and better clarifying its root causes. Given that men are more likely to be the perpetrators of violence, Walcott argued that understanding why men “batter and abuse” is essential for a prevention approach. Resonating Karkara’s point, Walcott noted that social institutions that promote sexism and other identity-based discrimination are socializing young men into a culture of violence. It is therefore critical, he argued, to work with young people as early as possible to counteract the downstream effects of celebrating hyper-masculinity. It is essential to address the additional problem that many boys have been socialized to have an “enemy consciousness” against females.

One of the pivotal moments in Walcott’s career where he realized the need to focus on boys and men in achieving gender equality occurred during his work with “troubled” youth in after-school programs in NYC. Many of the children involved with gangs and gun violence had also been exposed to predominately male-initiated violence in the home. In fact, “65-70% of people exposed to domestic violence are those who engage in community violence,” he said. Noting the contrast between what these boys would say to him individually versus collectively, he described that kids who privately told him that issues of domestic violence are horrible and that it is important to stand up for women as men, would in stark contrast remain silent in group discussions. This speaks to the fact that dominant male stereotypes limit boys’ and men’s’ ability to stand up for gender equality.

(1)  Domestic violence is an intersectional issue that requires a multi-pronged approach.

(2) Young people do not have the power “to change their material conditions and end violence.”

(3) Young children who champion progressive ideologies in a close-minded society may be at risk.

(4)  It is important to educate both children and adults on gender equality.

Question 1: A moderator asked both speakers to react to the Gloria Steinem quote: “There is no such thing as masculine and feminine skills, there are human skills. If that’s true, then what does it mean to be a man…Are we taking the humanity out of boys and men with these expectations…”

Response 1: Karkara argued that people “need to do a lot of unlearning of the ways the social institutions portray men throughout the lifecycle.” While it is possible for society to shift focus from dominant masculinities toward humanizing ones, he urged the need for “behavioral change tools and methodologies” that will translate conversations such as this into action. He and his colleagues are currently working to produce toolkits that consider the perspectives and tools of both younger and older people.

Walcott added an emphasis that the issue is about humanity and not just gender, He urged us to think critically about our definitions of manhood and womanhood, and to “challenge with compassion.” His experiences working with boys who were raised to become hyper-masculine men, engaging in physical, sexual and psychological violence have shown him that “psychological violence can be more detrimental than the black and blue that can eventually heal, and of course there’s a psychological component to the physical violence.” The disparate treatment of boys and girls in all facets of society teach children that some identities are more valuable than others.

Agreeing with Walcott’s point, Karkara added that it is critical for us to change the discourse on masculinities and femininities and to consider how boys and girls are represented in mainstream society. Unlike women, men are not socialized to have any concept of fatherhood, and this must change.

Q2: There are now more women in many educational settings than men. But uneducated people still have backward views about gender, and the results of this election show that men are afraid of women taking over.

R2: Walcott replied that although more women than ever are in higher education, women have had to pursue higher degrees to be equal with men (particularly white men) who drop out of school but are still entitled to male privilege.

Karkara agreed and reminded the audience that girls and women do not hold the same constitutional rights as men, as the Equal Rights Amendment was never fully accepted. It is essential for the United States to engage serious conversations on women’s rights, child development, and the role of families.

Q3: A recent UNESCO study showed that men have reduced access to higher education worldwide. However, when her organization tried to discuss men’s role in the existence of disparities of this type, they were very defensive and demonstrated institutional blindness.

R3: Karkara responded that many men are dropping out of education because they are expected to be providers, and education is generally feminized. Thus, many of these boys end up in gangs. This further supports the need to have conversations surrounding social integration and equality early on.

Walcott commented that gender dynamics vary by the type of jobs and industries being discussed. Moreover, despite educational gains, across the board, women are still being paid less than men.