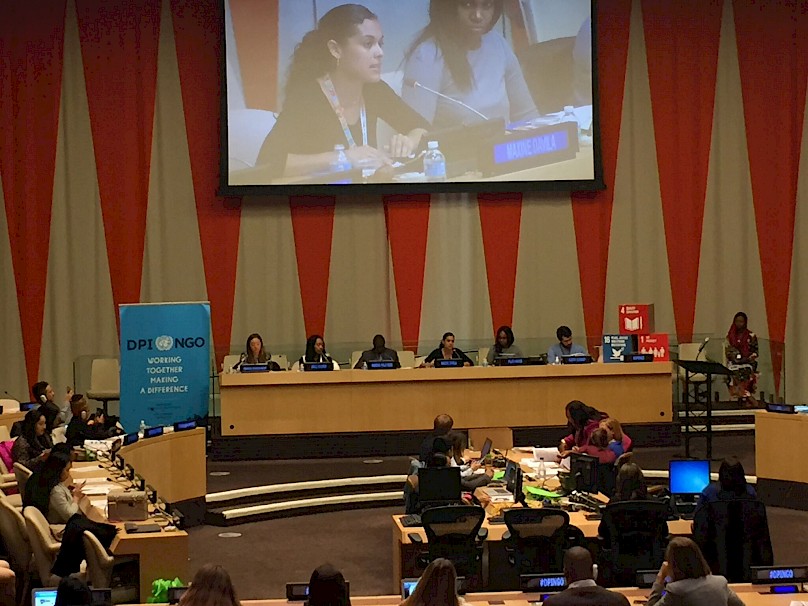 The United Nations Department of Public Information, Non-Governmental Organization (DPI/NGO) Youth-Led Briefing: "1+4=16 Targeting Poverty and Education for Peace" used the equation 1+4=16 to signify the relation between three of the 2030 Sustainable Development Goals (SDGs) that had been identified as youth priorities: (SGD1) No poverty + (SDG4) Quality education = (SDG16) Peace, justice, and strong institutions.

Short opening remarks were made by two youth representatives of NGOs who served as moderators: Maxine Davila from the World Association of Former UN Interns and Fellows (WAFUNIF) and Jadayah Spencer from the New York Metropolitan Martin Luther King Jr. Center for Nonviolence.

DPI Chief of NGO Relations, Advocacy and Special Events Jeff Brez explained the importance of the three SDGs at the basis of this briefing. These SDGs were given special attention during the 71st General Assembly in September, as was the role of youth in their actualization.

Panelist Sering Falu Njie, Deputy Director for Policy of the United Nations Millennium Campaign, explained that her experience with youth interns serves as a testament to the importance of youth engagement with the United Nations. Indeed, two youth panelists, Frances Simpson-Allen and Austin Schiano, had previously interned for Njie as part of the Millennium Campaign. Njie provided a brief history of the SDGs and how they improved upon the preceeding Millennium Development Goals (MDGs) that were more narrowly focused on developing countries. Given the interconnectedness of the SDGs, it is essential to address them holistically, rather than in a piecemeal manner, to ensure their timely success.

Two challenges to youth were posed:

(1) to educate at least 30% of each country’s population on the SDGs, and

(2) to compel 0.1% of each country’s population to advocate for the SDGs.

In a personal example of the connectivity between the three youth priorities of poverty, education, and institutions, Njie described how only his brothers, but not his sisters, were allowed to attend school in their village. Many years later, he and his brothers became accomplished professionals while his sisters were left behind in the village. Education can therefore be a gender equalizer that is key for “lifelong prosperity.”

His conclusion emphasized the need to create a space for youth voices in decision-making processes that directly affect their well-being.

Youth panelist Frances Simpson-Allen, Programme Management Officer for the Office of the Secretary-General’s Envoy on Youth, made three points:

(1) She emphasized that the immediate access to large quantities of information that define the upcoming generations has had important consequences for power structures, information exchange, and human progress. As such, the “SDGs will only be achieved with youth at the forefront.”

(2) The Secretary-General’s Envoy on Youth’s first project -- that was a big success -- was launched via social media.

(3) One example of an education-based initiative at the “nexus of goals 1, 4, and 16” is a young Bangladeshi woman leading this project in her home town.

Youth panelist Ms. Pilar Harris, an NYU student and Urban Practice Fellow, emphasized the global and local impact of the three youth priority SDGs. Currently she volunteers with a group of 15 to 17-year-old young women as part of the “Lyrics on Lockdown” project that brings education to incarcerated youth at Riker’s Island in New York City. The program is structured to promote (1) self-reflection, (2) self-advocacy, and (3) critical thinking, thereby facilitating reintegration into society upon release. Her work is situated at the intersection of educational policies that place certain youth at increased risk of ending up in the criminal justice system (i.e., school to prison pipeline) and criminal justice policies that seek to create safe spaces in jails.

Youth panelist Mr. Austin Schiano, member of the "Carnegie Council for Ethnics in International Affairs New Leaders Program," discussed his current work on the “Give Me 5 Campaign” of which he is Partnerships Director. The organization, with 16 national chapters worldwide, was built as a platform for youth advocates to bring increased attention to the issue of funding the SDGs. According to the “Present Value for Future Generations” report, if .5% of global military spending were redirected to sustainable development, we could achieve virtually all of the SDGs. Through youth and citizen engagement, they seek to advocate for governments to pledge .5% of their gross domestic profit (GDP) toward the SDGs. Schiano noted that this is a great way for anyone wanting to “develop a stake in this discussion” to get involved.

Youth panelist Ms. Umazi Mvurya, Development Fellow for the African Leadership Foundation (ALF), and its associated African Leadership Academy, described its mission "to develop the next generation of African leaders working together towards positive and sustainable change.” In line with this mission, ALF seeks to identify “grassroots leaders on a need-blind basis” and provide them with a competitive education that will ultimately allow them to use their critical thinking and leadership skills to exact change in their home countries and villages. Mvurya confided that she owes her own success to the opportunities provided through the African Leadership Academy—at 22, she has a fashion house that has employed five people back on the African continent. She urged that it is not enough to have any education; quality education is needed to make a difference. Sadly, she noted, the unaffordability of education and the fact that teaching is one of the lowest paid professions in the world suggest that society is not prioritizing education to nearly the extent that it should.

An interesting game meant to highlight the topic was led by Youth Representative for the New Future Foundation, Ms. Ruth Brinkley. Audience members were tasked with matching 5 of the 169 targets to SDGs 1, 4, and 16. The first participants to post their correct responses on social media (i.e. on twitter or facebook) would receive prizes at the end of the briefing. This game served the dual purpose of increasing youth awareness of SDGs and their targets, as well as using technology and social media to advocate for and increase awareness about the SDGs.

Another interesting activity, entitled “Solving the equation,” was led by Ms. Aishwarya Narasimhadevara, Youth Representative for the Medical Women’s International Association, and Ms. Calisher Perry, Youth Representative for the Olof Peace Palme Foundation. Color-coded index cards had been placed at audience seats, with three different colors corresponding to either SDG 1, 4 or 16.  Participants were asked to write on the card any experience they knew about, that related to implementing that goal in their own communities.

The 13 members of the Youth Steering Committee briefly introduced themselves and their affiliated organizations to the general audience.

Q1: To the panel – What does it say about our governments that .5% of GDP/public spending could be used to fund SDGs but are instead being devoted to defense?

R1: Schiano responded that it is indeed a cause for concern that we are investing more in war than in peace, a problem throughout history. To address this, he suggested that we must increase public awareness about the SDGs and government funding.

Mvurya posed the following question: “What does that also say about us, not just our governments?”

Njie stated that defense spending produces negative consequences and diverts money from sustainable development. He concluded that “.5% of reduced spending in arms (if not less) is more than enough to fund SDGs.”

Q2: To Mr. Schiano -- GDP is vastly different by country, so how do we ensure equal distribution of funds?

R2: Schiano replied that such a system has not yet been set.

Q3: To Ms. Harris – What are your suggestions for policy makers on how to address race-based disparities?

R3: Harris replied that a major issue is the disparate effect of school policies on youth from different backgrounds. For example, deviance in school is often equated with criminal behavior, which has cascading negative effects for young people’s future. As the child of incarcerated parents, she recognizes that this is not an uncommon situation – the only difference is that she did not follow the intergenerational school-to-prison path that many of the young people she works with at Riker’s Island did. Based on her experience, she finds this to be a “cyclical problem of incarceration.”

Q4: To panel – Education is the most important issue in Pakistan. Is this NGO working all around the globe or still in specified countries?

R4: Davila responded that the issues NGOs discussed today exist globally, and urged him to reach out to one of the many NGOs working in Pakistan that might relate to his specific concerns.

Q5: To Ms. Harris – What strategies and education tactics have been most successful in encouraging growth through education?

R5: Harris noted that while she is not a trained counsellor, she has found play-based activities and games to be most effective, primarily because these activities are not dependent on literacy level. Additionally, the young women she works with also enjoy collaborative work and long-term projects that enable them to share their final product with the entire group.