With the threat of Ebola still sadly present in Liberia, awareness about issues in this West African country is particularly important at this time. An event entitled 'Liberia in Transition' was held by the International Peace Institute (IPI), as part of their series on 'Special Representatives of the Secretary-General' (SRSGs), on Tuesday, 7 July 2015, from 13:00-14:30. Ms. Karin Landgren, SRSG to Liberia and Coordinator of United Nations Mission in Liberia (UNMIL), nearing the end of a three-year assignment in the country, served as guest speaker, with Mr. Warren Hoge, Senior Adviser for External Relations, IPI, as moderator. 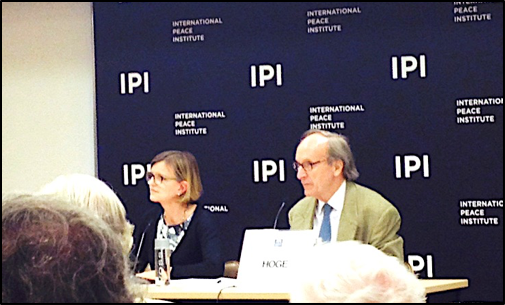 In providing a context, Mr. Hoge explained that Ms. Landgren’s presence and work in Liberia had significantly contributed to the country, especially amidst the Ebola outbreak that began in March 2014 and that to date has claimed the lives of upwards of 11,000 people in the region, 4,700 of those in Liberia.

Commenting on the recurrence of Ebola in Liberia on 29 June 2015, Ms. Landgren said it was “not altogether surprising.....Even though the country had not had a new case at that point for close to 100 days, Sierra Leone and Guinea together are reporting about 20 new cases every week, and these borders are extremely porous. The World Health Organization (WHO) has also said that once a country has had Ebola, there is a significant chance of recurrence within 12 months.”

In addition to the near-5,000 deaths that have occurred in Liberia since the initial outbreak of the virus, Ms. Landgren reported that the epidemic has taken a serious toll on the Liberian economy. While economic growth rate was projected at 5.9% last year, 2015 has seen a significant drop to close to 1%, with “basically any activity that required human contact curtailed or stopped during the Ebola period”. This includes loss of employment, drop in income, loss of most of a school year (due to mandated school closures), gaps in police training, reforms that were underway, and food insecurity. This combination of negative effects of Ebola, she explained, amounts to a “profound setback” that will affect Liberia for years to come.

Furthermore, the UN Mission in Liberia (UNMIL) has reportedly “drawn down” their security measures. Once a mission totalling 15,000, the military strength alone was reduced from 8,000 to 3,200 during Ms. Landgren’s tenure, due to the Ebola outbreak as well as to an initiative aimed at transitioning the Liberian government and society from UN aid to domestic efforts to relieve the community from Ebola and cope with the epidemic’s aftershock. The next step for the Liberian government is to follow up on a set plan to implement national security measures, with timelines and benchmarks, independent of UNMIL - a process that represents the transition from UN peacekeeping to Liberia’s national responsibility to independently govern and protect its country.

Liberia has been “relatively peaceful since 2003”, said Ms. Landgren (referencing the end of the country's civil war), but quoting a writer, added that the country is “at rest, but not at peace” due to Ebola. One positive note is that “Ebola has strengthened something in the national fabric…. I’m a little weary of the word ‘resilience’, but it’s something that speaks to pride, to communities, to a national identity…”

Yet, Landgren noted, the question remains: “Can we be confident of a satisfactory security transition in the next twelve months?” The answer, she said, must take into account: the outbreaks of violence over concessions about resources (e.g. oil, gold, rubber, iron ore); disputes over land use and benefits; weak or absent consultation; and political misinformation.

In addition, Liberian voices within the community must be heard, since “the impact of outside actors will always be limited”.

The presidential elections in October 2017 will serve as a milestone for Liberia, she added, although the process of rebuilding post-Ebola is a “work in progress.” In her view, because the Liberian governance was not strong either before the war or before Ebola, “public trust is an issue” and “developing human capital has not had high priority.”

Future development plans include fundamental improvements to the country’s infrastructure, as well as sustainability.

Acknowledging the waning interactions and aid on a macro level of sister missions in neighboring countries to Liberia, Ms. Landgren explained that “cooperation never ended - what ended was the physical contact”. Fear caused by physical proximity to those similarly affected by Ebola has led to dissipated relationships, including those between once-allied governments. To combat this, she emphasized a need for “strengthening bilateral relationships” and “more investment in creating regional bodies”.

The end goal is to restimulate Liberia’s economy and reintegrate the country into the rest of the world, as before the Ebola outbreak.