A Changing World: Can Institutions Cope? 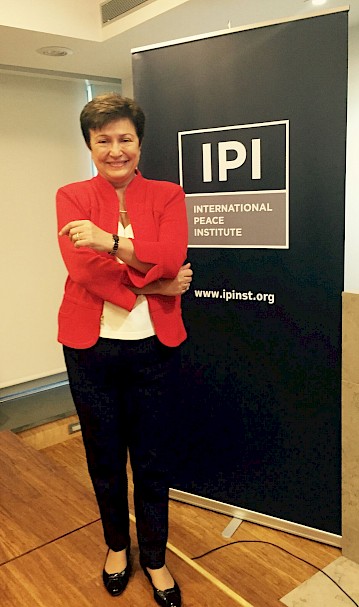 Approximately 85 people congregated in the Trygve Lie Center for Peace, Security and Development to hear invited speaker, H.E. Ms. Kristalina Georgieva, Vice President of the European Commission, talk about the challenges that the “speed and complexity of change” have posed for our institutions. The talk was followed by a Q&A session, moderated by Mr. Terje Rød-Larsen, President of the International Peace Institute.

From the outset of her talk, H.E. Ms. Georgieva highlighted the rapidity of change currently facing our world across a variety of indicators. As a case in point, she noted that whereas in the 19th century the United Kingdom’s GDP per capita needed 150 years to double, in the 21st century it took only 15 years for China and India’s GDP per capita to double. In a more personally relatable example, Georgieva described one of the moments in her life that opened her eyes to the speed of change. After telling her five-year-old granddaughter that there were no televisions or computers when she was her age, her granddaughter replied, “So you only had iPods?” According to Georgieva, these local and global changes underscore the fact that in a relatively short period of time, “the environment we operate in has dramatically transformed.”

Georgieva then noted the positive impact of technological advancement on our health and productivity. Even in the decade following 2007’s crisis, the global economy has continued to grow (currently $80 trillion GDP world). Importantly, she stated that “In this process of getting wealthier as a planet, there has been benefit for the people who were left behind.” She then went on to note that in the last 20 years we have seen one billion people eradicated from extreme poverty to live “decent lives.” This technological change has co-occurred with enormous demographic change.  Unfortunately, major demographic expansion often affects those countries that are least equipped, for example, Kenya.

At this point, Georgieva noted that in spite of the positive consequences of increased connectivity through technology, there is also a risk of what she termed a “multiplicity of shocks.” These shocks may present in any facet of life, such as in finance (e.g., economic crisis), in nature (e.g., climate change, natural disasters), and perhaps most significantly, in conflicts (e.g., violent extremism and terrorism). To the extent that the world continues to become increasingly interconnected, the troubles of one part of the world are no longer just “somebody else’s problem.” Local problems have wide-reaching consequences and require a multilateral response. Georgieva followed this cautionary note with one of optimism--that we as humans have the capacity to adapt and find solutions to these new challenges. To this end, she proposed four aspects of change that require our attention and resources:

Georgieva challenged us to try to “think of the unthinkable” so that crises do not take us by surprise; however, currently, our institutions seem unable to anticipate shocks. She recounted that in 2008, one of her most painful memories was watching the Syrian crisis unfold, a crisis that she asserts “we could have and should have seen.” Indeed, she noted that we tend to see shocks only after they have occurred. In light of this, we need to start investing in crisis prevention (e.g., mobilizing resources) rather than devote the majority of our funds to crisis response.

According to Georgieva, our institutions are currently adapted to the “slow pace of change of the 20th century,” and are therefore ill equipped to quickly shift and adapt their priorities. While change is possible, it requires us to remove barriers between institutions and increase their interactions with one another (e.g., creating task teams).

We need competent leaders who also have the knowledge to effectively address global issues to manage our institutions in the context of rapid and complex change.

To end, Georgieva offered her candid response to the following self-posed question: How do we solve the world’s government? She then presented both a realistic and a fantastic solution. The realistic solution: extra-terrestrials come from outer space and change our institutions. The fantastic solution: “We people do it ourselves!”

Question 1: What would you do if you were Secretary-General?

Q2: What was your reaction to Brexit?

A2: Georgieva responded that the Brexit vote came as a shock because the goals of the EU and the UK were ostensibly aligned (e.g., increasing productivity, using resources more effectively); however, the UK still voted to leave. She went on to explain that those who voted against Brexit were those younger, more educated people that are most likely benefited by a new economy, whereas those who voted in favor of Brexit were those people who felt excluded from the new economy (e.g., rural, less educated people). She also noted that this phenomenon of demographics shaping responses to change is not a uniquely European phenomenon (see Q8). Therefore, we need to actively create policies that protect people who face job loss in a new economy so that they too feel included (and not left behind) in the process of change.

Q3: How do you see the wars in many parts of the world ending given the new characteristics of conflict?

A3: Georgieva replied that we need to better understand the underlying causes of violent extremism and disrespect for humanity. Humanitarian workers often struggle to get into war zones even in the worst of crises, suggesting the erosion of the idea that humanity needs a space amidst crisis. She argued that this is partly driven by the co-occurrence of increased jobless technology and demographic expansion, which has left many young people with no future prospects. Finally, she highlighted that people living in regions of conflict are the most important actors in responding to conflict, and we need to support their role in developing solutions.

Q4: Will you speak about (1) the EU’s attention to the Syrian crisis and (2) the rumors that you are a contender for the next Secretary-General?

A4: In response to the first part of this question, Georgieva stated that the response to the Syria crisis “leaves a lot of room for improvement” across the board. People were wishfully thinking the war would come to an end and essentially resolve itself, but this ultimately harmed those most affected. While many Europeans have risked their lives to help Syrians in Syria and nearby countries, foreign fighters face dangerous situations without the protection of a strong military. She noted that Europe has chosen to be a “soft power” rather than a “military super power.” However, given rapid change, Europeans are now reconsidering their attitudes on security and defense. Additionally, countries in the affected region need to be engaged in finding a solution. In response to the second part of the question, Georgieva stated that she would only accept a nomination for Secretary-General if it came from her own country, because she is a “proud Bulgarian.”

Q5: Given that the burden is not spread out in a commensurate way, how can institutions (European or UN) have certain leverage to convince member states (root/motor of institutions) to become involved?

A5: Georgieva responded to this question with her own: Who is the United Nations? She then went on to emphasize that “We are the member states, we need to look for ways in which we are more coherent and try to reduce the finger pointing.”

Q6: How would we like to see UN’s relation with Europe develop?

A6: Georgieva responded that we need to create realistic expectations of the EU as a relatively young union—we cannot expect it to function as a “fully mature and integrated body yet.” The EU is comprised of 28 member states with unique histories. As it matures as a union over time, the EU can begin prioritizing a better relationship with the UN.

Q7: Another global institutional challenge is that a small number of companies (e.g., Amazon, Google) are acquiring power that is supernatural and un-regulatable at this time. What should the world do about this?

A7: Georgieva replied that global regulation is the solution to this challenge (however difficult to achieve), and achieving this goal would be a “major win” for institutions. We need to work towards defining global rules for the unintended consequences of new technologies and large companies, such as cyber crime and cyber terrorism.

Q8: The segment of population reflected in voting for Brexit are the same type of people who are turning to the right in the U.S. and voting for Donald Trump, and this phenomenon is also happening in Europe and other countries. How do we respond to this?

A8: Georgieva responded that rapid change and concurrent crises have made people anxious because they cannot imagine a solution. At the same time, the phenomenon of populism (people gaining power and prestige based on the promise of large-scale, undeliverable solutions to global issues) is spreading. As an alternative to populism, she encouraged us to be realistic about our current state of knowledge – we understand some issues, but are still struggling to understand many others. Most importantly, she asserted that we must “hold on to our humanity” and help the parts of the world that are falling behind. National and civil leaders need to be more optimistic, and remember how far we have come from past conflict and turmoil. Finally, she noted that while serving as Humanitarian Commissioner, she consistently noticed the presence of goodness in even the most devastated places of the world. Unfortunately, the voices of hate are far louder than the voices of goodness. Institutions “need to amplify the voices of goodness.”

Q9: What’s the right size of the EU – is a country like Turkey better in the club or outside of the club?

A9: Georgieva replied that because the EU has been struggling with crisis after crisis for the past decade (e.g., financial crisis in Greece, terrorism), the EU and the European people are not currently concerned with the number of members in the EU.

Q10: Given the importance of interconnectedness, should young people in Europe receive a free rail pass to facilitate travel and increased opportunities?

A10: Georgieva responded that while she has indeed considered this possibility before, her team is now more concentrated on creating more jobs and opportunities for people. One potential policy they are considering involves an “internship guarantee schema” so that every young student knows that there will be a job waiting for him or her.

Q11: How do we deal with the issue of state sovereignty in a world of internationalism?

A11: Georgieva responded that it is important that members of unions of sovereign states are explicit about what needs to be done at the level of union versus the level of state. For example, no country can independently fight climate change.

Q12: Managing uncertainty through anticipation or matching structures to change have leadership implications – what are the main qualities of this hypothetical leader?